“People performed outstandingly because they want to, not because they have to.” –Marc Rudnick on Community Builders Cooperative

We recently talked to Marc Rudnick about the history of Community Builders Co-op, which is closing its doors this year. In recognition, we share some of their history as the worker-owners transition into retirement. 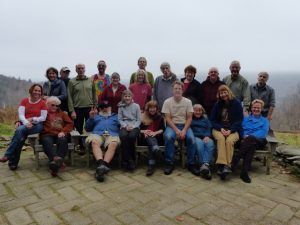 The original worker-owners of Community Builders Cooperative met as activists protesting the construction of the Seabrook nuclear power plant in New Hampshire. They successfully helped block one of the two reactors planned for Seabrook, frequently driving between Boston and the seacoast for weekend protests. Schedules decidedly allowed for the unpredictability of actions which might include arrest, as the young activists’ political work continued as they formed a worker cooperative. The Boston area was where this group of young people lived and committed to working hard for themselves and their communities. Here they would later find a strong base of homeowners interested in working with a cooperative largely made up of activists.

Starting in the late 1978, the collection of workers who would become Community Builders Co-op labored for a Boston contractor. Quickly, they realized their “destinies as workers were rather limited” there. A group began meeting at night, talking about their dreams of how life and work together could be different. By 1979, a real company was formed; 12 workers-owners came together to embark on a journey of deciding how to work well, together.

The work of building renovation itself was not glamorous, and always had risks, including exposure to dangerous site conditions and toxic materials. Marc Rudnick explained the key skill of a renovator was the ability and commitment to problem solve. “Everything else could be learned.” Early on, the collective abandoned skill-based pay scales and decided to calculate wages based on the type of work someone was doing each hour; the least popular (and most dangerous) work would be the highest paid. Eventually this became too complicated and the cooperative switched to paying equal wages to everyone. There was no expectation that workers had to work 40 hours per week —  this allowed people to stay particularly engaged in their political and family lives.

“Over the years, a lot of people have told me that is a literally impossible way to run a business, and yet it worked for 40 years for us!” said Rudnick. The early intensity of the workers’ commitment to both the work itself and their vision of the workplace they could create together drove the business–and their commitment to community building in their lives outside the business. “We credit a few things for our long existence…we all came in with our eyes open, wanting an alternative workplace…co-ops created by buying out (or bailing out) a boss have a harder path. It was a big advantage for us to be true believers from the beginning.”

As they experimented and figured out what would work for them, the workers of Community Builders Co-op were committed to sharing best practices and ideas.  In the 1980s, they co-sponsored a seminal, national conference at Harvard University for worker cooperatives to come together and share ideas. Throughout their work, Community Builders Co-op wanted to commit to stay involved in the communities in which they worked, trying to give back money and time to local justice work. 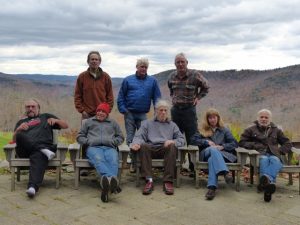 Eventually, the time spent protesting against nuclear power became time spent with growing families. But workers stayed politically engaged, bumping into customers–many of whom had become friends–at protest marches in Boston. As they close down after 40 years, the worker-owners intend to make one last social impact. Union Square, Somerville, the neighborhood where they have had their workshop for years, is rapidly gentrifying. Rudnick, a longtime activist on affordable housing in his hometown of Waltham, hopes the remaining worker-owners are committed to making sure the building they co-own becomes something to support the working class culture of Union Square. They are currently brainstorming the details of that transition.

“I have spent a large part of my life outside of my work being a community organizer and always have organized around an understanding that engaging marginalized people [at the center, not as an aside] is the way to build a stronger community. I’ve been blue-collar my whole life and deeply appreciate being able to retire…I hope co-ops are one way that reward can be there for future workers;  a retirement that is a way to sit back and stop worrying about earning money and become a better part of your community.”

We’re honored to have had Community Builders Cooperative as a founding member of the Federation and excited for the new ways the worker-owners will be able to benefit from their wisdom going forward.