At the February 19, 2020 Democratic Debate, Mayor Pete Buttigieg was asked about his stance on Sen. Bernie Sanders’ proposal for employees to control up to 20% of the stake in the country’s largest companies, while mandating that employees elect 45% of corporate boards of directors boards. While Buttigieg did not agree with the proposal, he agreed that “employee ownership is a great idea”. In response, Sanders shared the following:

“What we need to deal with this grotesque level of income and wealth inequality is we need to make sure that people who working… you know, Mr Bloomberg, it wasn’t you who made all that money, maybe your workers played some part in that as well… it is important that those workers share in the benefits. Also we have so many people who go to work every day and they feel not good about their jobs – they feel like cogs in a machine. I want workers to be able to sit on corporate boards as well, so they can have some say over what happens to their lives.”
– Senator Bernie Sanders 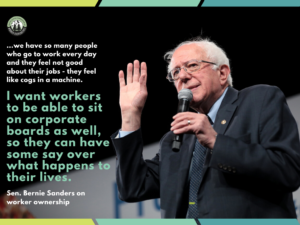